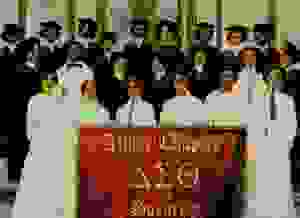 Delta Sigma Theta Sorority, Inc. is a non-profit organization whose purpose is to provide assistance and support through established programs in local communities throughout the world.

Founded on January 13, 1913 by twenty-two collegiate women at Howard University, the Sorority is currently a sisterhood of more than 300,000 predominately Black college educated women.  This includes over 1,000 chapters located in the United States, Canada, Japan (Tokyo and Okinawa), Germany, the Virgin Islands, Bermuda, the Bahamas, Jamaica and the Republic of Korea.

The history of Delta Sigma Theta Sorority, Inc. commends the spirit and the imagination of the twenty-two college women who founded on beloved sorority on January 13, 1913.

It is with similar spirit and imagination that during the late 30's, dedicated sorors of DST worked laboriously toward the establishment of a chapter to serve the city of Tyler. These sorors were Bessie Davis Randall, Nanette Wheatley Williams, Mildred Jones Baker, Lenora Amos, and Lillian Uggams.  In 1940, Martha Hunter joined in the efforts.

During the interim of the Chapter's establishment, Sorors Pearl Robinett and Nona Moffatt were initiated by the Dallas Chapter, and Sorors Lillie Mae Givens, Geneva Smith Taliaferro and others were initiated into the Alpha Iota Chapter of Wiley College.

The first initial program of Gamma Epsilon was held at the Texas College auditorium, Sunday evening, November 15, 1942, at 6:30 p.m.

Gamma Epsilon, a mixed chapter (undergraduate/graduate), was reorganized in 1946 as Gamma Epsilon Sigma, a graduate chapter. In 1958, it became Tyler Alumnae Chapter.

This website is the sole property and responsibility of the Tyler Alumnae Chapter of Delta Sigma Theta Sorority, Incorporated.